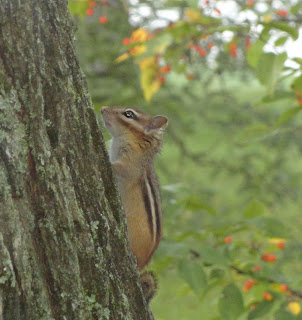 So, now a chipmunk has followed in the squirrel's footsteps and is watching me as I work.  When I aim the camera, it turns its head away slightly (as above), as if to deny that it has been spying.

A chipmunk has nothing to do with an agent, but a blog visitor asked on the last post if I have an agent, and the chipmunk is watching me compose an answer:

I've worked with my current agent for thirteen years, and I trust her completely, value her advice, and admire her talents. I rely on mine to sort out contracts and foreign rights, to provide sound analysis and judgement regarding major publishing questions, and to represent me with integrity.

I need an agent, but not everyone does.

The chipmunk is still watching . . .
Posted by Sharon Creech at 7:37 PM