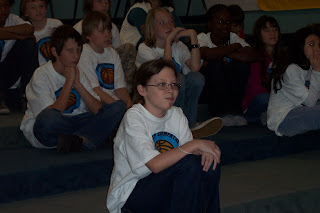 The Basketball Poets
31 May, 2009
I first heard about the Basketball Poets in 2003, when I received a letter from a teacher in North Carolina.  She had recently formed an elementary school activity, Basketball Poets, combining, yes, basketball and poetry.  That combination and the teacher's enthusiasm for her students and for Love That Dog intrigued me.  Her school was near where my sister lives, so I planned a visit.
Well!  That teacher, Marty Mentzer, and her students blew me right out of the water!  They performed for me (instead of my being expected to perform for them):  a rousing rendition of Blake's "Tiger, Tiger," complete with basketballs bouncing on accented syllables.  They then read their own poems written in the style of Jack, in Love That Dog, and afterwards, they all shot hoops. It was all such a perfect, crazy, wonderful thing to witness.
Each year I send Marty books for her new B-ball Poets, and each year I visit them and they entertain me.  Each year their group performs elsewhere in the community. I've heard that other schools have set up their own Basketball Poets, too.  Amazing and wonderful! Crazy and perfect!
Posted by Sharon Creech at 3:30 PM No comments: 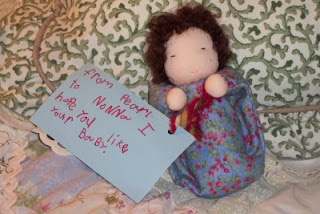 Poppets, Wednesday, 27 May, 2009:
Shortly after my brother died in January, my daughter made and sent me the above 'poppet.' It's about six inches tall, soft and squishy.  My granddaughter helped make it and made the note attached.  I'm not sure which is cuter, the poppet or the note.  I don't collect dolls, don't have any other dolls, and only ever had one doll when I was young, but I was surprised how much comfort this one brought/brings. Send someone a poppet today?
Posted by Sharon Creech at 5:49 PM No comments:

Fisherman, Fisherwoman
Tuesday, 26 May, 2009
My husband found this pair in an antique shop in Westfield, NY.  I love them so much.  They stand about 5 inches high and are carved of wood.  They're neither signed nor valuable (except to us).  My photo doesn't capture the intricacies of their faces nor that the tip of each nose is broken off.  The woman holds a fish; the man carries a sack over his shoulder.  I could write a whole book about this pair. Want to name them?
Posted by Sharon Creech at 9:19 AM 1 comment: 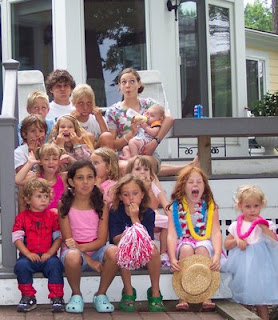 Kids Making Faces
Sunday, 24 May, 2009
One of my favorite renovation projects was turning an old one-room cottage into a playhouse and filling it with dress-up clothes, board games and art supplies.  Every summer when the grandchildren, nieces, nephews and cousins come, they entertain us with their changes of costume and their made-up-on-the-spot plays. Kids!  Too cute, too funny.  Here they are making faces for the camera.
Posted by Sharon Creech at 12:47 PM No comments: 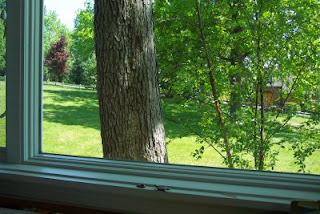 Your View, 23 May, 2009
After posting yesterday's bit about the view from my office, I wondered what you all were seeing from your windows.  Will you describe or send a photo please?  Above is view from a second window in my office.  Can you make out what is on the window ledge?
Posted by Sharon Creech at 2:44 PM 4 comments: 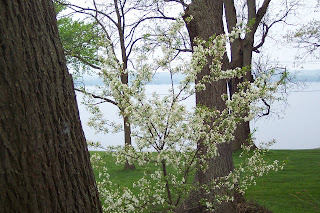 Of Trees and Water, 22 May, 2009
Trees and water (rivers, ocean, lakes) abound in my books, so it will come as no surprise that I love and need these natural gifts.  Every office space I've had has included at least one window with view of at least one tree.  For many summers when I was young, my family spent a week or two (the whole of my father's annual vacation) at a small lake in Michigan.  When, just a few years ago, my husband and I were able to choose a house to renovate on a lakeside acre, we placed my office overlooking trees and lake.
The view (see above) doesn't distract me; it fuels me and inspires me.  I've often quoted the founder of the TASIS international schools, who said, "Every child needs and deserves beauty," and she particularly meant beauty of the environment.  I believe that profoundly.  We older people need it, too.
I hope you all have a window and a scenic view.
Posted by Sharon Creech at 4:16 PM No comments:

Thursday, 21 May, 2009
Now, as is usual for this time of year, I am between books.  The final touches have been added to The Unfinished Angel (Sept. 09), I've written and given a speech at IRA about the most recent book (Hate That Cat) and the forthcoming Angel, and now is time to catch up on 'stuff' and re-fill the well.  And yet. . .it is also hard not to begin a new book.  I'm used to that daily routine of writing the next scene.
A couple IRA notes:
I don't get much opportunity to be with other writers, so I was charged up to have at least a few minutes with Kate DiCamillo, John Scieszka and Jacqueline Woodson.  I admire them and their work.  I was honored to read Kate's newest book, The Magician's Elephant, in advance copy; it's pure Kate, pure pleasure.  Scieszka's recent Knuckleheads is hilarious; anyone who has two or more brothers would especially enjoy this book.  (I've got three brothers, all knuckleheads.)  I love all of Woodson's books and am about to begin her new one, Peace, Locomotion (follow-up to Locomotion.)
One other thing I love about these three writers is that they all have good senses of humor.  I love "being in their energy", as my Angel would say.
And was it my imagination or was this IRA crowd especially enthusiastic and fired up?   Nice mood all around.
I'm new at blogging.  I hope I get better.  Tomorrow I'll try posting a photo. . .
Posted by Sharon Creech at 7:25 PM 3 comments: