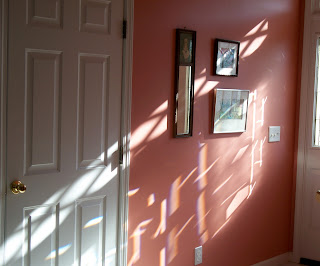 Objects or scenes that appear simple often reveal hidden complexity. I think this is what first draws me into a story--not a complex idea, but something so pure and simple that it haunts and engages the mind.

The above scene, for instance, is merely a hallway with afternoon light flirting with the wall and door. I'm drawn to this sight. I like that contrast of light and shadow, and I'm intrigued by the fleeting nature of that particular pattern of light. Can I capture an instant, can I understand why it appeals, can I recreate the scene in words, and can I do it in a  simple and pure way? Can I resist cluttering it in the rendering of it?

Here's another photo to illustrate: 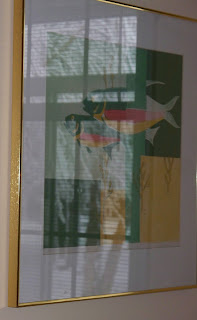 At first glance, this might appear to be a poorly-taken photograph of a framed silkscreen (two fish swimming in the sea)–'poorly-taken' because of the reflection that obscures the painting. But if you look closer, you see that 'within' the silkscreen of two fish is the reflection of wintry birch branches outside the room wherein this artwork hangs. For me, this becomes more than a simple reflection of light and shadow on the wall; it holds a story with many layers, a story of contrasts and parallels that wants to be told. Can I plumb the depths of that story and yet convey those depths in an uncluttered and pure way?

The Colors of a Draft 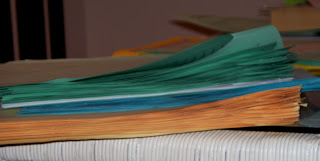 I use pastel colored paper for manuscript drafts; it feels more tentative and fluid than white. It also gives me a visual record of when parts of a draft were done.

In the above stack, the gold pages (approximately 100) were written between May-July, 2009. The blue were written between August-December, 2009 (only about 30 pages because I was on book tour and in England during that time.) The green pages are the most recent (about 100), written in my recent immersion in North Carolina.

I'm not done yet, and the draft is exactly that: a draft. It's like the frame of a house without the windows in it. No paint yet. No electricity. Definitely no granite countertops.  Lots more work to do in subsequent (and new-color) drafts.

The colors help my memory. If I need to quickly refer back to an incident, I can remember when I wrote that scene and what color paper it is on, and I can find it easily.

The final draft (maybe 2 or 3 drafts from now) will be all white and pristine.  Subsequent revisions will be on colored paper to easily identify where changes were made.  I guess I like things fairly orderly; otherwise writing a book and keeping all the details straight might make me crazy.
Posted by Sharon Creech at 9:35 PM 21 comments: