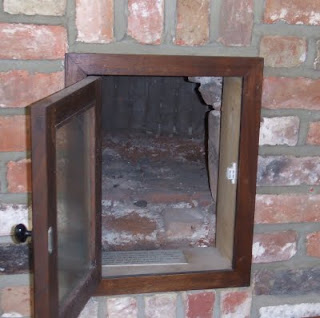 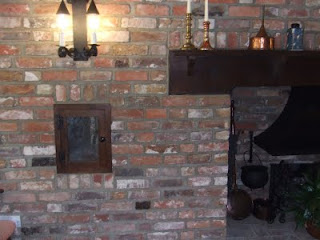 
In this cottage in Surrey, England, are various niches and cupboards and hidden spaces. A child would have loads of hiding places for treasures. To the left of the dining room fireplace is a small cupboard.  Inside is a note explaining its purpose:

This is a typical example of a cloam oven. It was heated by burning large bundles of kindling wood in the oven. When enough heat had been generated the ash was raked out and baking commenced.

The interior is all brick, igloo shaped (round with domed top), about three feet in diameter.  A bricked-over space on the outside house wall is probably where the oven was vented to allow smoke to escape.  It seems such a sensible oven, and although I know it is much easier to turn a knob and have an oven pre-heated within minutes without all the fuss and bother of building a fire and raking coals and ash, I still wish this one were functional so I could try it.
Posted by Sharon Creech at 12:22 PM