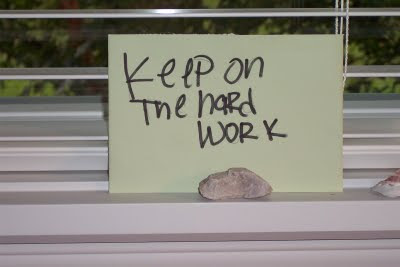 Encouragement
We all need encouragement from time to time, mm? The above note, which now rests on my office window ledge, was written on an interior envelope which contained a letter from a fan/reader. Several things I like about this note: that it says 'keep on' instead of 'keep up'; that it was first written in pencil and then retraced in marker; that this second envelope was used to hold the special letter (the outer, addressed envelope not being secure enough perhaps); that the reader recognized that writing might be 'hard work'; and that the reader was thoughtful enough to send encouragement. All of these things tell me I would probably like the writer of this note very much.
I wonder what bits of encouragement other writers keep on or near their desks . . .
Posted by Sharon Creech at 7:11 PM