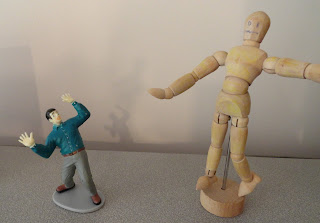 My grandchildren love small figures (my grandson calls the human ones his 'guys') that they manipulate in various dramas.  They've done this since they were old enough to talk. It fascinates me how well young children become story-teller, director, animator, stage and prop hand, camera man/woman - maneuvering among these roles with ease.

Often we film these mini-dramas (I take photos & compile in slideshows; lately they're doing their own with a Flip camera.)  On our recent trip to Maine, we took along some 'B movie figures' that I had found (like the man on the left above) and a couple artist models (like the one at right.)

The figures went everywhere with us and the grandchildren:  to the dock, to the lawn, to the picnic table, in the car.  I brought some home with me.  They're like book characters - set them up and see what they say and do.

Posted by Sharon Creech at 8:27 PM